Animal rehabilitation – how it should be done!

“I will not leave money, property or fame for my children when I´m gone. I will leave them something much more valuable than that – a forest full of animals that they and other people can enjoy.” — Orlando Zagazeta

I found a center for animal rehabilitation that does exactly what it says on the box! It´s all about releasing animals back into their natural environment, no tourist business, no money from volunteers, no cages to keep animals in for tourists. Just animals, being freed to where they belong – the jungle.

No other metric is better than that for a rescue center. And nothing is more important for Orlando, than animals and their rescue and rehabilitation. He doesn´t eat until they get fed, he gives all his fruits and most of his vegetables to them and himself eats biscuits and coffee…

Hi lives FOR the animals, not FROM the animals, and is a true inspiration to me. More about him and the center in these videos and reports from a couple of years ago:

His work is now being supported by a bunch of people willing to help, under association called Cerelias.  It´s all work in progress, early days, so the website needs a re-vamp (which I´m working on – it will be www.cereliasperu.com or check out Cerelias on Facebook), the center needs a new site, to give the animals better facilities. They are looking for publicity and for support from the government, local companies and people, to be able to build better facilities for the animals, accomodate more animals, build an area for animals that can´t be released for reasons like removed canine teeth when they were pets, so they can´t protect themselves etc.

I was there for 4 weeks, initially planned 1 or 2 weeks, but after seeing how good the center was, the animals in the process of rehabilitation and the beautiful setting in the middle of the jungle, I couldn´t resist to stay longer.

So how did it go, what did I do? Well, I´ll let some pictures speak:

This is the center, it´s falling apart a bit, the monkeys have destroyed the roof, that´s why resources are needed for a new place, with a strong roof that the monkeys wont take apart! 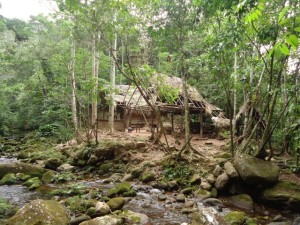 I was spending a lot of time with the animals, feeding them, cleaning their areas, taking them for walks, repairing the facilities and sometimes, picking their fleas or having them pick stuff off of me 🙂

Pablo was the best flea picker.

But after work, there was time to relax with the animals too:

Nicola was a hyperactive coati, trying to eat you most of the time, but there were moments of peace…

Chiquitino was the needy but cuddly one

His favorite place to rest. And have a pee sometimes.

And there was plenty of silly time too!

Pablo was one of the bigger and stronger monkeys, but still very playful. 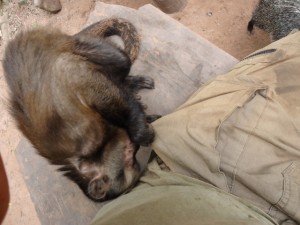 they all also like to steal stuff from your pockets….

And Chiquitino loves to hide in your tshirt.

and Kusho, the one with a slightly twisted personality, likes to bite a lot. But gently.

I couldn´t stay at the center after 6pm, because there´s a nocturnal animal, who gets out at that time, and she had bad history with humans, so she would bite. So I stayed in a house about 10 min away.

After work, I went to my bathroom to take a bath:

A naked dip in the river at the end of the day was one of my favorite parts!

To then do some writing or reading on my laptop, including all the bugs who wanted to have a go too. I read three books this month, which is my best so far!

Next morning, I´d go down for around 7am, to prepare our food and food for the animals in the kitchen:

To feed the hungry stomachs:

I also took some days or time off, to go and swim in an amazing waterfall, or enjoy the surrounding nature: 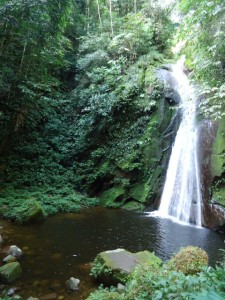 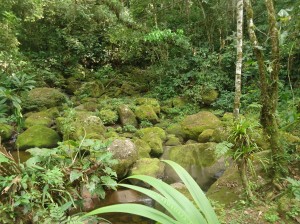 This one is like from an Indiana Jones movie!

This was one amazing experience, beautiful and peaceful nature, we helped and freed mistreated animals back into the wild, I met some amazing people, learned lots about animal rehabilitation and had plenty of time to think about life, new ideas for the future, tried some local medicines. One of the best experiences on my journey so far!

Liked it? Let others know!

4 thoughts on “Animal rehabilitation – how it should be done!”

This site uses Akismet to reduce spam. Learn how your comment data is processed.