There are many types of travellers. Short holiday makers, tourists who pop in an out of touristy places and then fly home in short bursts, backpackers who follow the main backpacking trail, nomads, who make the road their life, explorers who seek adventure off the beaten path or people who want to do something extremely challenging and different, like Karl Bushby

. He is walking from the most southern point of South America, all the way to London. Just walking, no other form of transport.

Now that´s one bastard of a challenge, he dedicated the last something over 12 years of his life to that. I´m not prepared to do that, as I would be missing out on too many other things, but he inspired me to do long distance walking on this journey. (When I say long distance, I mean long from an average person´s point of view, not thousands of kilometers.)

So I decided to put my skills and gear to the test by walking from Riobamba to Baños, through national park Penipe, filled with loads of mountains, forests and an active volcano, creating the most amazing scenery to walk through:

The actual walk wasn´t straight of course, at places, I was going around in circles too…

But at the same time, the scenery is rugged and tougher to walk, lots of inclines and declines and curves, making the walk much longer and tougher.

It ended up being around 90km (the map above, it was more like 100km with me getting lost and all the mountains and fields), although that´s just an estimate, as Google Maps doesn´t recognize the route I took, it´s too much off the beaten path.

Planning? Well, a little bit 🙂 A friend recommended this route, because of it´s scenery, so I checked it out on Google Maps, drew a quick map in my notepad with some waypoints and set off the next day in the morning, with around 20kg of all my possessions and 3kg of food and water.

The walk started badly as I left the city (Riobamba) through a different way than I planned (how about that for a start! My sense of direction was always great….but actually, now I know that it´s good in nature and a bit shit in cities. I´m just a nature person, what can I tell you…). So I was walking on a road that wasn´t on my map, only using my compass to push north. That compass proven to be the best thing ever if you´re walking off the beaten track. No signs, maps or what people tell you is as reliable (or available) as a good compass.

Knowing I´m on a different road to what I planned, I decided to just push north, regardless of what towns I go through, then the plan was to estimate 30km of going north and start going north-west, so that I end up at the right side of volcano Tungurahua. This volcano was also my main waypoint, but I didn´t see it just yet (and for another 40km).

I asked people I met on the road whether I can get to the volcano this way, which they confirmed, so I just kept pushing forward. I underestimated how far the volcano was, not because of the distance, but because of the difficult terrain. I was going at a good speed until I reached a massive canyon with two options:

I decided to take 2. to change the scenery. There was a little problem with that. The bloody canyon was fucking massive! I walked with dust and wind in my face for about 4 hours and the canyon was still on my right hand side, where it was when I started. The good thing was that I was going north, just not exactly straight, but mapping the canyon. 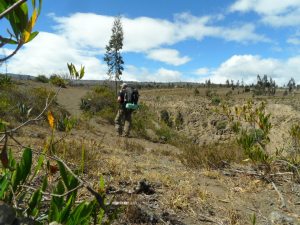 That´s him. The looooong canyon on my right.

At the end of the day, I got closer to civilization, which wasn´t the best thing before the night, as I wanted to stay out of sight camping, but it wasn´t too difficult to find a good spot, hidden in a pine forest to camp for the night.

This day was better, I found a carretera which meant I was walking faster, walking to Ilapoa, a small town around 3000 meters above the sea. This meant that in a day I walked from 2000 to 3000 meters.

In the village, I was passing a small shop, when the owner, a woman in her 60s asked me to sit down and “descansar” (take a breath). After a quick chat about what I´m doing, she offered to make me rice and vegetables, a very nice surprise, especially if you were eating canned beans, bread and peanut butter for the last day and a half. I also bought other stuff from her shop, offered to help with any work she needed doing, but she wouldn´t have that, so I continued walking.

She didn´t like my tattoos and piercings, saying that I look mean 🙂 Hope she sees tattooed people differently after our encounter.

Around 4 in the afternoon, I got to another village, about 300metres higher than the previous one where they sent me down a muddy road, saying that it´ll take me to Tungurahua. And take me there it did… After about 2hr walk through bendy road in between many fields and farmers staring at me initially, but after I smiled at them and said hello, they smiled back, I took one corner and was left speechless with this view:

I was VERY happy to see this view, not just because it´s beautiful, but it was a major checkpoint in my walk. 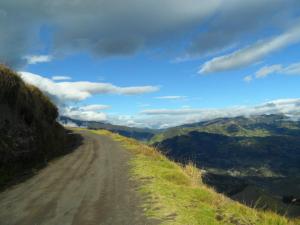 I sat down in a field, next to two cows and was just enjoying the view, whilst having a cigarette. After about 10min, a farmer (a woman, what´s the female word for a farmer?) showed up, so I asked whether I can camp there, she was fine with that, didn´t even seem surprised. I fell asleep around 7 in the afternoon, as I was very tired and the sun goes down around the same time, so being in a tent, you adjust your sleep to the sun – sleep early, get up early.

so far, the best view out of my tent!

I woke up around 5 as wanted to see the sunset and also, in the morning there´s usually no clouds, so I could see the whole volcano and El Altar opposite (another set of snowy peaks, not a volcano, but beautiful too). Had a quick breakfast and was walking around 7.
Trouble here was that now I needed to get down from the mountain, which meant taking a cow path…there was no road, but many cow paths. Which one is the right one? Ask the locals, but there were none, probably went out to a field elsewhere to work. So I walked for about 3 hours up and down the mountain with about 40 degrees incline, sometimes walking back on myself, crossing another canyon, until I found a way down. This was maybe 2km of straight line, but around 5km of small paths, and walking in circles.

As I lost so much time, I decided that I will get to Baños, my destination, today. It´s recommended to walk max 6 hours per day, I already lost half of that, not really gaining much distance, so I was happy that there was a road down there. Walking fast (with the wind in my hair…), I kept walking, with a few stops, until I finally got to Baños around 6 in the afternoon. Not realizing how bloody long Baños was, I walked for another hour until I got to the part I knew from before (I was in Baños before on a bus, it´s kind of a middle stop between the cities I visited). Finally getting to the destination, which wasn´t a hostel, but a pub that claimed they serve various unusual beers, not the standard lager you get here, which I don´t like. They were closed. (and on the next day, they “just” run out and were waiting for a deliver. bugger.) Ok, off to the hostel I knew from before, $6 a night with a private room is as good as it gets for a touristy place like Baños.
Only in my room, once I took my shoes off, I realized how much I overdid it. I walked for almost 12 hours and did maybe 30km in a day up and down the hills, producing two massive blisters, one on each foot. Once the adrenaline cooled down, I couldn´t walk properly, so was just lying on the bed, watching Discovery Channel in spanish, then fell asleep, without even taking a shower. Too knackered to care about anything else but resting.

But I was very proud, the feeling of satisfaction was great, I saw some amazing views I wouldn´t normally see, I spoke to local farmers that one normally doesn´t meet, I learned about camping, running out of water in the middle of nowhere and really having to ration the last drop, walking just with a compass, a backpack and your determination.

Liked it? Let others know!

This site uses Akismet to reduce spam. Learn how your comment data is processed.